From Bahu to Badshah: The Begums of Awadh and Political Ideology in Early-Colonial North India 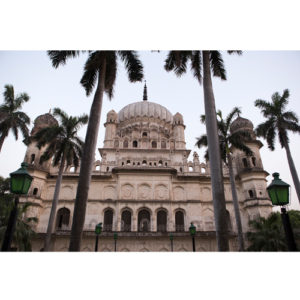 From the battle of Buxar in 1764 until the end of 1857/8 Rebellion, the North Indian regime of Awadh played a pivotal part in the expansion of British imperial rule in South Asia. Throughout this period, the Awadh rulers’ wives, mothers, and other senior female relatives—often referred to collectively as “the begums of Awadh”—remained integral to the polity and its contentious relationship with the British East India Company. Yet despite their considerable and widely recognized influence within North Indian politics, little attention has yet been paid to how the begums conceptualized Awadh as a political entity or to how they understood the multiple and overlapping roles they played within the royal household, the ruling family, and the state.

Focusing on two particularly influential women—Bahu Begum (r. 1754-1814) and Badshah Begum (r. 1814-37)— Abbott examines developments in the begums’ political thought from the late-eighteenth until the mid-nineteenth century. In so doing, he argues that the begums responded vigorously to challenges from the Awadh rulers and from the Company by drawing upon both Islamic legal and Mughal imperial traditions, as well as on a shared, dynamic Anglo-Indian political culture emerging in the late eighteenth century. Although ultimately unable to forestall efforts to divest them of political authority, the begums nevertheless offered sophisticated rebuttals to the Awadh rulers’ aggressive assertions of exclusive, proprietary and patriarchal sovereignty, responses that not only reflected on-going conversations about the nature of the state in the nineteenth century but that also shaped political discourse in North India more broadly.

Nick Abbott is a PhD candidate in UW-Madison’s Department of History, specializing in the early-modern Islamic world and early-colonial South Asia. His dissertation, “Household, Family, and State: Negotiating Sovereignty and Sarkar in the Awadh Nawabi, 1775-1840,” explores intersecting ideas of gender, family, and political discourse in eighteenth- and nineteenth-century North India. He is currently a visiting fellow at The Ohio University’s Center for Historical Research in Columbus, OH.