Visions of Patañjali as a Nāga, Siddha and Sage 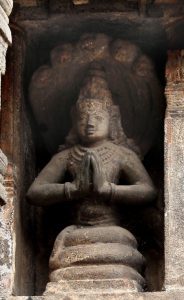 Patañjali is the name of several ancient Indian authors, including a grammarian who wrote the Vyākaraṇa-Mahābhāṣya (a commentary on Pāṇini’s Aṣṭādhyāyī), the philosopher who compiled the Yogasūtras and an authority on the medical system of Āyurveda. In recent decades Patañjali has emerged as an important figure in modern Yoga whose visual representations are often installed in Yoga studios, where they function as objects of reverence. At the same time they serve as links between the practice of āsanas commonly taught there and the teachings of the Yogasūtras. In this talk I will trace the development of Patañjali’s iconography, starting with early representations as a two-armed half-human half-serpentine devotee of Śiva in the tradition of the Naṭarāja Temple at Cidambaram in Tamilnadu, South India. I will then examine the more recent four-armed iconography and the iconography of Patañjali as an accomplished being (siddha), absorbed in meditation. Finally, I will look at works of art experimenting with new forms.

Gudrun Bühnemann is a Professor of Sanskrit and Indic Religions in the Department of Asian Languages and Cultures at the University of Wisconsin-Madison. She has published extensively on South Asian iconography and ritual. Her recent books include Śākyamuni’s Return Journey to Lumbinī (lumbinīyātrā): A Study of a Popular Theme in Newar Buddhist Art and Literature (Lumbini International Research Institute, 2015) and The Iconography of Hindu Tantric Deities (First Indian edition, revised, as a single volume, Aditya Prakashan, 2016). Her work on Yoga includes Eighty-four Āsanas in Yoga: A Survey of Traditions (with Illustrations) (D.K. Printworld, 2007; 2nd edition, 2011) and “The Śāradātilakatantra on Yoga: A New Edition and Translation of Chapter 25” (Bulletin of the School of Oriental and African Studies no. 74/2, 2011, pp. 205-235).