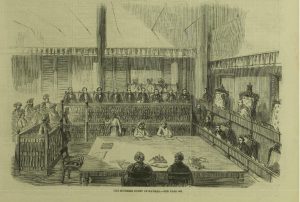 This paper discusses the long and troubled history of the jury trial in India between 1860-1960. Although the origins of its history are as old as Britain’s colonial rule itself, trial by jury for Indians was first introduced in any uniform way in 1861. During the following century, British and Indian lawyers, judges and administrators struggled to deal not only with the prejudices and biases that were inherent to questions concerning the racial, religious, caste and class composition of juries, but, of equal importance, they questioned the transference of British ‘rights’ to Indian subjects as well as the authenticity of the jury trial as a means of judgment by and for Indians. The jury trial survived Independence, but not for very long. During the 1950s, both judges and prominent lawyers continued to express serious reservations about the role of the jury in the legal process. By the early 1960s, Indian legal opinion frequently referred to the jury trial as a “failed transplant” and its death, prematurely heralded by the famous Nanavati trial, was brought in almost by stealth in the 1970s.

James Jaffe is Professor Emeritus of History at UW- Whitewater. He is a Fellow of the Royal Historical Society and currently a Fellow at the Institute for Legal Studies at the Law School as well as an affiliated faculty member of the CSA. His recent publications include Ironies of Colonial Governance: Law, Custom and Justice in Colonial India (Cambridge, 2015) and he has been the recipient of grants from the National Science Foundation, the US-UK Fulbright Commission, and the Ford Foundation at Jawaharlal Nehru University.