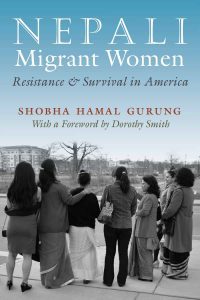 The presentation/discussion offers insights into the lived experiences of Nepali migrant women and connects those insights to the broader issues of gendered labor, transnationalism, and women’s agency and empowerment. It provides insights about the particular work experiences of transnational workers embedded in a pan-coethnic market, which is distinct from previous literature about workers who work for employers of another ethnicity and from studies of workers in a coethnic labor market. One of the main elements of the presentation is to address how Nepali women constantly connect and reconnect with transnational communities both in Nepal and in the US through investing in social and cultural capital. It shows how women were not just investing in themselves or their families—they were doing community-building work based on a sense of moral obligation and social responsibility. These women were connected to formal transnational organizations such as NGOs, but their community-building work also took place at an interpersonal level. It addresses the effects of women’s civic citizenship, agency, and empowerment, which were far-reaching and transcending global boundaries.

Shobha Hamal Gurung is Associate Professor of Sociology and Women and Gender Studies at Southern Utah University and the Program Director of SUU’s Nepal Studies Program. Her research focus is gender and labor; globalization, migration, and transnational studies; South Asia and inter-national studies; and social justice and human rights. Her broad expertise on the lives of Nepali women is reflected in these publications: “Women Weavers in Nepal: Between Global Market and Local Craft Production” (2004); “Growing Up Hindu: Mapping the Memories of a Nepali Woman in the United States” (2008); “Nepali Female Migrants and Informalization of Domestic and Care Work: Service or Servitude?” (2010); “Gendered Labor: Experiences of Nepali Women within Pan-Ethnic Informal Labor Markets in Boston and New York” (coauthor, Bandana Purkayastha, 2013); “Sex Trafficking and the Sex Trade Industry: The Processes and Experiences of Nepali Women”(2014); “Shifting Gender Roles and Shifting Power Relations: Immigrant/Migrant Nepali Families in New York and Los Angeles” (2014); “Fluidity and Realities of Race, Class, and Gender: Different Places, Times, and Contexts” (2014), and “Dynamics and Ramifications of US Immigration and Visa Policies: Nepali Transnational Workers, Families, and Children in the United States” (2015).  Her 2015 book Nepali Migrant Women: Resistance and Survival in America was published by Syracuse University Press in November in their longstanding and critically acclaimed Gender and Globalization Series. She has received funding for her research projects from the Institute for Asian American Studies at the University of Massachusetts-Boston; the Ford Foundation’s Project on Low-Wage Work, Migration, and Gender; and the University of Illinois at Chicago. She has presented her scholarly work locally, nationally, and internationally for various communities- academic, activist, and NGOs and INGOs (e.g., the American Sociological Association, the Society for the Study of Social Problems, Sociologists for Women in Society, UN Commission on the Status of Women 58, International Sociological Association, University of Washington, and Padma Kanya Multiple College, Kathmandu-Nepal).