Co-Ethnicity, Capacity, and Connectivity: Who Becomes a Slum Leader in India? 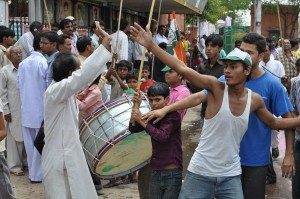 How do the political brokers essential to machine politics emerge? Existing scholarship takes brokers as a static given and cannot address how they initially build the following of voters that make them attractive to political elites. We address this crucial question through a study of a pervasive and emergent broker across cities in the global south—informal slum leaders. We conducted an ethnographically informed conjoint survey experiment to identify the citizen preferences that guide slum leader selection across two major north Indian cities (N=2,194). Our analysis finds that shared ethnicity—the overwhelming focus of contemporary scholarship on political selection in Asia and Africa—is often trumped by non-ethnic indicators of a broker’s capability and connectivity to urban bureaucracies. These findings shed important light on the origins of patron-client hierarchies and the political shifts engendered by rapid urbanization in India and other developing democracies.

Adam Auerbach is an Assistant Professor in the School of International Service, American University. His research and teaching interests include the political economy of development, local governance, and comparative political institutions, with a regional focus on South Asia and India in particular. His first book project examines informal community governance and development in India’s urban slums. The project draws on two years of ethnographic fieldwork, archival research, and an original survey he designed and administered in two north Indian cities. His research has been supported by the Social Science Research Council, Fulbright-Hays, and the National Science Foundation. He received the 2013 Best Fieldwork Award from the Comparative Democratization Section of APSA, the 2014 Best Dissertation Award from the Urban Politics Section of APSA, and the Gabriel A. Almond Award for best dissertation in the field of comparative politics. His work appears in the journals Contemporary South Asia and World Politics.