Empires of the East: The Return of Great Power Politics in the 21st Century 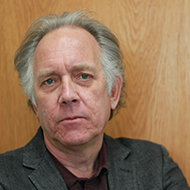 This lecture will demonstrate that in much of Asia –and specifically in South Asia–empires were a normal, and often prevalent, form of political organization throughout history but in the 20th century nearly disappeared and now, in the 21st century, are re-emerging in new but historically recognizable forms.

André Wink is a professor of history at the UW-Madison and the author of Al-Hind: The Making of the Indo-Islamic World, Volume IV: The Age of the Great Mughals, 16th-17th Centuries (forthcoming).