The Martyr, the Moviegoer: Bhagat Singh at the Movies 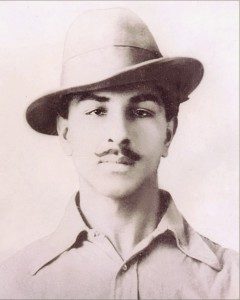 Bhagat Singh (1907-1931) was a major anticolonial figure in north India in the 1920s, as the leader of the Hindustan Socialist Republican Army (HSRA). In the past, Elam has offered analyses of his reading practices (Elam 2013, Elam 2016); in this presentation, he will explore Bhagat Singh’s film viewing practices, and the ways in which early silent cinema influenced Bhagat Singh’s career and writing. Drawing primarily on two American silent films that Bhagat Singh recorded watching — Uncle Tom’s Cabin (1927) and Wings (1927) — Elam offers an analysis of Indian anticolonial thought that takes as its primary medium the cinema. Consequently, he traces an alternative circuit of thought between North American and South Asia, rooted in film, at the beginning of the twentieth century.

J. Daniel Elam is the Mellon Sawyer Seminar Postdoctoral Fellow in “Bibliomigrancy” at the University of Wisconsin-Madison. He received his PhD from the interdisciplinary program in Rhetoric and Public Culture at Northwestern University in 2015. His work focuses on Indian anticolonial writing and thought in the global interwar period.