Bowing to No One 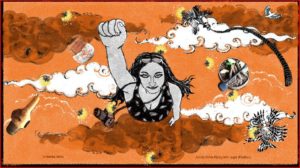 Travel with Amrita Simla, an animated superhero as she flies to meet Satyavati, an Indian indigenous woman in Central India. Satyavati shares her singular struggle to buy and farm her land, forage and hunt in her community forests, practice midwifery, save seeds, and maintain food sovereignty in the face of constant struggle, sustained marginalization, and numerous barriers. A woman of many skills, Satyavati demonstrates vast expertise on how to live lightly on this world, for all to witness. This is the first in a series of animated short documentaries on Indian women (and some men) farmers, a part of the Amazing Adventures of Amrita Simla Superhero.

Sarah K Khan earned a BA in Middle Eastern history and Arabic (Smith College), two Masters (public health and nutrition, Columbia University) and a Ph.D (traditional ecological knowledge systems, plant sciences, New York Botanical Garden and CUNY).  While in post-production with Amrita Simla on the series, she is producing, directing and researching with Culinary Backstreets,  a monthly series of media content on immigrant foodways in Queens, NY. The goal is to make visible the invisible, and to relay the stories of migrants, through the lens of food with photography, film, interactive maps and story. She is also developing a multimedia and photographic exhibit entitled “Invisible Porters” that explores the lives of migrant workers in Old Delhi. Currently she is a Senior Research Fulbright-Nehru Scholar in India, where she is in post-production, directing and producing a series of films on Indian women farmers with an international team of film editors, graphic artists, and animators.