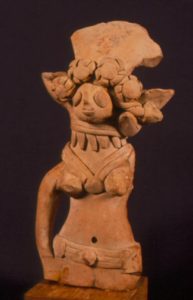 This lecture will focus on the most recent discoveries of the Indus Civilization (2600-1900 BC) which is the earliest urban society of ancient India. The sites of the Indus are found in the northwestern regions of South Asia, in what are the modern countries of Pakistan and India. Excavations at large urban centers as well as smaller settlements have shown that this urban society was supported by a diverse economic base that included specific types of domestic animals and plants, as well as technologies that were unique to South Asia. An overview of the Indus cities will include the discussion of their writing, arts, technology, trade, and belief systems. Lasting over 700 years, this civilization spread over a vast region and also developed important trade contacts with the Arabian Peninsula, Mesopotamia and Central Asia. The eventual decline and transformation of the Indus Civilization and its links to later cultures in South Asia will also be presented, including textiles, cuisine, settlement organization and arts. Finally, the contributions of the Indus to the modern world will be discussed.

Dr. Kenoyer has been excavating and carrying out research on the Indus Civilization since 1975 and has excavated at the site of Harappa, Pakistan since 1986. He has also worked at sites and ethnoarchaeological projects in India and more recently in Oman. He has a special interest in ancient technologies and crafts, socio-economic and political organization as well as religion. These interests have led him to study a broad range of cultural periods in South Asia as well as other regions of the world. As part of his research on ancient bead technologies, he has undertaken studies of collections throughout the world, with a special focus on West Asia, China, Taiwan, Japan, Korea and Southeast Asia. His publications include monographs on the Indus civilization as well as numerous articles, a grade school book on ancient South Asia and even a coloring book on the Indus cities for children. His work is featured on the website www.harappa.com and www.imagesofasia.com

He was Guest Curator with the Asia Society for the exhibition on the Ancient Cities of the Indus Valley Civilization, which toured the U.S. in 1998-1999. He was a special consultant for the Art of the First Cities: The Third Millennium B.C. from the Mediterranean to the Indus exhibition at the Metropolitan Museum of Art, New York in 2002.