Visions of Order and Antiquity:
Palimpsests and Invention in Banaras 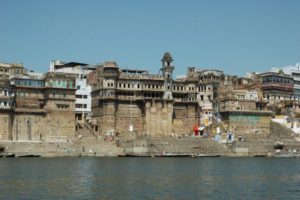 The subject of this talk is the city of Banaras, the iconic Hindu religious center in
Northern India that is often described as the oldest living city in the world. A closer look reveals that in terms of its material fabric, the city, though immensely venerated, was refurbished relatively recently. Between the late-sixteenth and early twentieth centuries, it was embellished with temples, monasteries, mansions, ritual bathing tanks and riverfront fortress-palaces (ghats) that form its major edifices, pilgrimage nodes and urban spaces. Patrons, priests and pilgrims from across South Asia invested in Banaras and created a city that could both realize and enhance textual prescriptions. Its renewed sacred landscape became the subject of lively pilgrimage maps and its spectacular riverfront was described through panoramas, picturesque views and effusive travelogues. In this talk, Desai examines the confluences as well as tensions that have shaped this complex and remarkable city. Historians of South Asia have often viewed Hinduism and its practices as being part of an ancient religious and cultural heritage that is independent of its more recent histories. Such scholarly divisions also extended to analyses of religious built environments. In so doing, this talk will raise issues that are central to historical as well as contemporary Indian identity.

Dr. Madhuri Desai’s research interests are in the area of South Asian architectural and urban history with a concentration on the Early Modern and colonial periods. Her first monograph,Banaras Reconstructed: Architecture and Sacred Space in a Hindu Holy City (University of Washington Press, 2017) is an in-depth study of the remaking of the city of Banaras between the late sixteenth and early twentieth centuries. The book presents a fresh perspective on an iconic sacred city as well as on the making of sacred urban environments in South Asia. Dr. Desai also has an abiding interest in the historiography of South Asian architecture and has explored this scholarly area through publications in anthologies and journals including her essay, “Interpreting an Architectural Past: Ram Raz and the Treatise in South Asia,” that was published in the Journal of the Society of Architectural Historians in December 2012. She is the co-editor (with Mrinalini Rajagopalan) of an anthology titled Colonial Frames, Nationalist Histories: Imperial Legacies, Architecture, and Modernity (Ashgate, 2012). Dr. Desai teaches upper-level courses in the history of architecture and urbanism in South Asia. She also teaches surveys on the architecture and art of Asia, South/Southeast Asia, and Islam. She was a recipient of a post-doctoral fellowship from Yale University’s Paul Mellon Centre for Studies in British Art (London) for fall 2010.