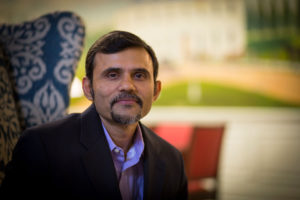 From taxi drivers to CEOs and Indian American governors Haley and Jindal—how distinctions strain solidarity in the politics of South Asian (or Desi) Americans. Focusing on Indian, Pakistani, and Bangladeshi American communities, Sangay K. Mishra analyzes internal characteristics that lead to multiple paths of political inclusion. This exploration is critical to understanding the changing nature of the politics of immigrant inclusion—and difference—in America. Mishra will be presenting on his book, Desis Divided: The Political Lives of South Asian Americans, available now from University of Minnesota Press.

Sangay Mishra specializes in immigrant political incorporation, global immigration, and  racial and ethnic politics. Before joining Drew University in 2013, he was a Mellon Postdoctoral Fellow at Lehigh University, PA. He received his Ph.D. in Political Science from the University of Southern California, Los Angeles. He served as the co-chair of Asian and Pacific American Caucus of the American Political Science Association from 2014-2016 and is currently a member of Committee on the Status of Asian Pacific Americans of the Western Political Science Association. He teaches courses on Race and Politics, Immigration, Public Policy and International Relations. His book, titled Desis Divided: The Political Lives of South Asian Americans has recently been published by the University of Minnesota Press.