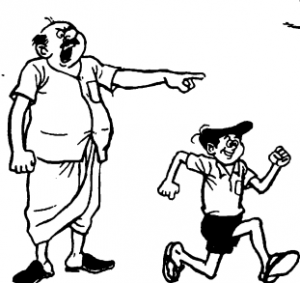 I will focus on a reading of a few stories from two “classic” Bangla comic strips— Narayan Debnath’s Bantul the Great and Handa- Bhonda, published serially in the children-and-young-adult periodical Shuktara since the 1960’s. Bantul, for one, is an unusual superhero with a torso that is strikingly overdeveloped than the lower body, endowing him with super strength and speed, though he does not have any other superpowers. Even though he isn’t smart, his “never say die” attitude and aptitude for finding simple solutions to complex problems lead to him saving the community from crises. On the other hand, the dynamics of Handa-Bhonda, two naughty boys, parallel that of Laurel and Hardy and Tom and Jerry. Handa, the thin boy, creates situations to get his cousin Bhonda, the obese one, into trouble, usually by avoiding chores, but is punished for his misdeeds by their Scrooge-like uncle. The unusual pictorial style, refreshing simplicity and humorous engagement with contemporary social problems continue to endear these comics to young and old readers over at least three generations in Bengal.

Depicting “universal” situations that tread the thin line between comedy and pathos, these comics critique a capitalist work-oriented ethic, while foregrounding other cultural matrices peculiar to Bengal. Apart from overarching themes like Bengali identity and an unambiguous moral compass, these comics also draw our attention to the construction of masculinity and alternative body-image. Bantul and Bhonda are body-shamed, bullied and stereotyped as dull/unintelligent, but their contributions to both the public and private spheres lead to a reassessment of marginality within the postcolonial Bengali-middle class milieu.

Anwesha Maity recently completed a PhD in Comparative Literature from the University of Wisconsin-Madison. Her dissertation on Bengali science fiction explores the impact on the genre of colonial and postcolonial history, the question of what “science” is, and indigenous aesthetic-philosophical systems. She has published in Science Fiction Studies, Studies in the Fantastic, and Jadavpur University Essays and Studies, and her co-edited volume, Indian Genre Fiction: Pasts and Future Histories, is currently available from Routledge. Apart from academic endeavors, she enjoys travelling and following Japanese popular culture, particularly anime and manga.