Indus Copper and Bronze Metallurgy: A Model from Harappa 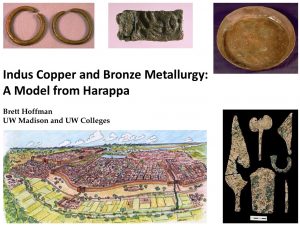 The Indus Civilization (2600-1900 BCE), was well known for its large urban centers, regional towns, and many smaller sites that emerged throughout the alluvial plains of northwestern South Asia. This presentation will focus on objects made from copper and copper alloys found at the site of Harappa, Pakistan and other contemporaneous sites of the region. Copper and bronze objects are among the most abundant artifacts found in these cities, second only to pottery and fired clay objects. Copper and bronze was used to make tools, weapons, jewelry, household materials, and items of both economic and religious importance. A detailed study of these metal objects provides insight on both social and economic organization of the ancient city of Harappa as well as of the Indus Civilization as a whole.  The study of copper alloy use at Harappa has identified distinct patterns of consumption that link copper and bronze objects to complex social and status hierarchies during the Indus period. It is also now possible to show how Indus copper interaction networks stretched out from sources in South Asia to sites across the Arabian Peninsula, Mesopotamia, and to the Mediterranean.

Brett Hoffman is a PhD candidate in the Department of Anthropology at the University of Wisconsin-Madison and a Lecturer in the Department of Anthropology and Sociology with the University of Wisconsin Colleges. His research interests include the Indus Civilization, copper and bronze metallurgy, chemical analysis of archaeological artifacts, and early urbanism.