Engineering the Sacred Cow: Cow Protection and Cow Production since the Nineteenth Century 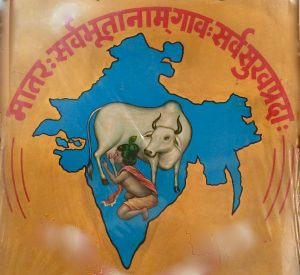 In India today, the Hindus’ “sacred cow” is depicted as gaumata, or mother cow, who nourishes all the nation with her milk. The image of gaumata has been central to the modern politics of cow protection since the nineteenth century – but its meanings have changed, along with the materialities of bovine bodies. This paper traces the effort, always incomplete, to transform the mother of bullocks, first symbolically and then materially, into the milk-producing mother of the nation.

Cassie Adcock studies religion in the political culture of modern India. Her current research, which examines the long history of alliance between cow protection and dairy development in north India, has received support from Fulbright, the Library of Congress, and the National Endowment for the Humanities in partnership with the American Institute of Indian Studies. She is the author of The Limits of Tolerance: Indian Secularism and the Politics of Religious Freedom, a history of Indian debates over religious conversion. Cassie Adcock is Associate Professor of History and South Asian Studies at Washington University in St. Louis.