The Crane Knows Not the Glory of the Lotus: Bhakti and Carnatic Music

Carnatic Music is a vibrant tradition of classical music practiced in South India. In its evolution, practice and reception, it has strong links with Hindu religious propensities. Lyrics of most of its compositions are about Hindu deities. What does such religious affiliation mean for a sophisticated music? Do performers feel the need to straddle the two worlds of the religious and the aesthetic? Beginning by locating Carnatic compositions in the larger context of the Bhakti movement, the talk will trace the careers of four early and eminent women performers of the twentieth century and two leading male musicians of today to explore the complex negotiation with the two dimensions as evidenced in their musical personas. To argue that raga is not of any religious hue is valid and one might say raga lies at the heart of Carnatic music and the religious content of the compositions is irrelevant. But is Carnatic music just presentation of ragas or do the compositions, undeniably religious, form a critical aspect of its identity? The talk will argue that in its evolution, its emergence as a “classical” music of India, in its social and cultural value the religious dimension is undeniable. The talk will consider the broader issue of the applicability of the separation of the aesthetic from other areas of human engagement, in this case, religious, to a traditional music like Carnatic music. The place it has in the community that practices and patronizes it is a complex intertwining of the aesthetic and the religious and a separation of the two seems difficult, but it is not impossible. And yet, the idea of the independence of the aesthetic seems an unnatural foisting of a modern European idea on a traditional culture like the South Indian. 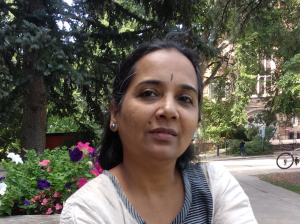 Dr. Lakshmi Sreeram (Ramakrishnan) is an accomplished vocalist in the traditions of Carnatic (South Indian) and Hindustani Khayal (North Indian) music. She holds a Ph.D. in the field of Aesthetics as explored in Sanskrit literary traditions. She also trained for many years in the classical dance form of Bharatanatyam. She pursues a career as performer, teacher, scholar and writer/journalist based out of Chennai, South India. Her research interests include Bhakti poetry and music; she has offered perspectives on the works of Andal, Meera and Kabir. She is also interested in Language theories in Sanskrit and applying them to understand Raga music as well as in broader issues of aesthetics and Philosophy. She is currently at the University of Colorado, Boulder on a Fulbright scholarship. Her research area is improvisation in Western Musical traditions with a focus on Jazz. She is also teaching part of a course on Improvisation in the 2020 Spring semester. Read Lakshmi Sreeram’s articles on Firstpost.com and TheHindu.com.