Through this talk, I want to trace the mobile genre of the “refugee narrative” in Sri Lankan Tamil writing. By looking at the Sri Lankan Tamil novel Mmm written by the author Shoba Shakthi, translated into English as Traitor, this talk examines if the Tamil refugee narrative can embody ideas of displacement and belonging in terms of both thematic and formal elements which might, in turn contribute to the creation of a uniquely Sri Lankan subjecthood that can frame discourses of statehood and reconciliation.

The 2002 Tamil novel Mmm (translated as Traitor in English) by Shobasakthi traverses spaces that are not often covered in contemporary Sri Lankan fiction. Set against the background of Tamil separatist movements of the late 1970s to the mid-1980s, the novel blends tales of caste and class oppression, while alternating between first- and third-person narrations. Traitor centers on a Sri Lankan Tamil militant, Nesakumaran, who flees to France as a refugee, and is eventually murdered, after being charged with the rape of his own child, Nirami. The novel showcases the breakdown of Nesakumaran’s self, as well as his familial and communal relationships, and reflects these dissolutions in the fragmentation of the narrative. This talk argues that the novel depicts Sri Lankan Tamil nationalism as a more complicated concept than is conventionally assumed, a heterogeneous discourse marked by distinctions of class, caste, and gender. By wrestling with conflicts that are internal to the Tamil community, Traitor illustrates how Sri Lankan Tamil literature envisions the national space of Sri Lanka as merely a site on which to mourn the lack of an ethnic, Tamil solidarity. 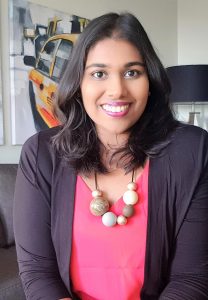 Dr. Vasugi Kailasam is Assistant Professor (Tamil Studies) at the Department of South and South East Asian Studies at UC Berkeley. Her research concerns global Tamil literatures, postcolonial literature and filmic and digital cultures of contemporary South Asia and its diasporas. Specifically, her work examines narrative form and its connections to South Asian cultural identity formations, race and ethnic politics. Her research has been published/ forthcoming in Journal of Commonwealth Literature, Journal of South Asian Popular Culture, Postcolonial Text and the film studies anthology titled Tamil Cinema in the 21st Century: Politics, Genre and Technology. Before coming to UC Berkeley, Dr. Kailasam convened the Tamil Studies programme at the National University of Singapore from 2015- 2019.