Doing Nonviolence: An Experiment in Student-led Learning and Research Initiatives 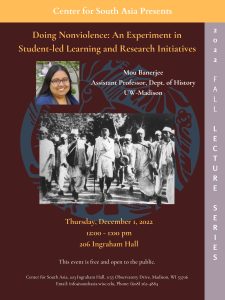 What is Nonviolence? Why is it important? Where did the idea of nonviolence emerge from? What is its relation to violence? What is it used for? Who are the people who use it, why and in what context?

The Nonviolence Project emerged out of two undergraduate seminar classes that I teach in the History Department at UW-Madison, partly to try and answer these questions.

I was asked in Fall 2020 to present to the Board of Visitors of the History Department about these courses, and the impact these classes had on my students. During the presentation, I was asked by the Board how I could further develop the ideas behind the seminars I taught. They were interested in a tangible resource that I could create for the students at UW-Madison. And in keeping with the Wisconsin Idea, they wondered how I could disseminate the ideas and history behind global nonviolence movements to the Madison and Wisconsin community.

Interns for the project learn how to think about nonviolence as both a political tactic of resistance and a political idea that has a long history that has shaped the ways in which we think about issues related to human rights, racial, sexual and political equity, and human striving against unjust regimes and unjust laws. As we go ahead with the Project, my students and I engage with the question of how to live an ethical, compassionate life in the world beset with immense cruelty and political violence. The idea behind the NVP, then, is to learn by doing – where the study and research of nonviolence as a social, cultural and political ethic of courageous resistance provides my students with the tools to create a more equitable world, incrementally.

Dr. Banerjee received her Ph.D. from the Dept. of History at Harvard in 2018. Her first book, “The Disinherited: Christianity and Conversion in Colonial India, 1813-1907” is forthcoming from Harvard University Press. The book-project is an intellectual and political history of the creation of the Indian political self – a self that emerged through an often-oppositional relationship with evangelical Christianity and the apologetic debates arising out of such engagements.

Her research was funded by the award of the 2013 SSRC-IDRF dissertation research fellowship which enabled her to conduct research at multiple archives in the UK, in India and in Bangladesh. Her dissertation received the Harold K. Gross award , which is granted annually by the faculty of the History Department at Harvard to the graduate student whose dissertation ‘gave greatest promise of a distinguished career of historical research.”

Her second book, under contract with Juggernaut Press, India, is an intellectual history of the life and times of the pioneering Indian social reformer Raja Rammohan Roy.

Dr. Banerjee’s research interests include the religion and politics in India, the history of gender, hunger and food politics, and the history of borders and immigration in colonial South Asia. Prior to her appointment at UW-Madison, she was College fellow at the Department of South Asian Studies at Harvard in 2018 and Assistant Professor of History at Clemson University in 2018-19.