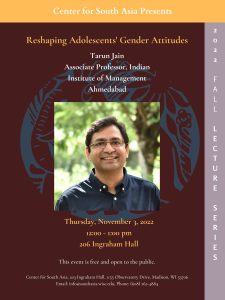 Gender inequality exists in every society, but it is especially acute in many developing countries. This project evaluates an NGO-lead intervention in Haryana, India that engaged adolescent girls and boys in classroom discussions about gender equality for two years, aiming to reduce their support for societal norms that restrict women’s and girls’ opportunities. Using a randomized controlled trial research design conducted in 314 secondary schools, we find that the program made attitudes more supportive of gender equality by 0.18 standard deviations, or, equivalently, converted 16% of regressive attitudes. The program also led to more gender-equal self-reported behavior, and we find weak evidence that it affected two revealed-preference measures. When we resurveyed study participants two years after the intervention had ended, the effects had persisted. 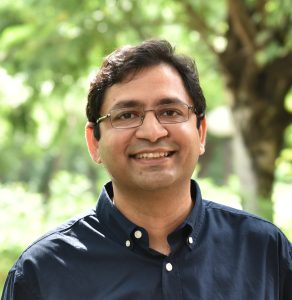 Tarun Jain is an Associate Professor of Economics at the Indian Institute of Management Ahmedabad, and serves as an Associate Editor at Economic Modelling. Previously, he was on the faculty at the Indian School of Business. His research focuses on understanding causes and consequences of human capital formation (for instance, with education and health), especially in the context of fast-growing developing countries. Gender is a topic of special research interest given that women face persistent barriers in economic advancement. His research has received funding from the Bill and Melinda Gates Foundation, the International Growth Centre, and the International Initiative for Impact Evaluation, published in peer-reviewed journals such as the American Economic Review, the Review of Economics and Statistics and the Journal of Public Economics, and featured in the New York Times, The Economist, the Times of India and Indian Express. He has written for media outlets such as the Economic Times, The Hindu and Mint among others. Professor Jain earned his PhD in Economics from the University of Virginia, and his BA from Franklin and Marshall College. He teaches the core course on Microeconomics and an elective in Health Economics in the MBA program at IIM Ahmedabad, as well as a PhD elective on Organizational Economics. At the ISB, he taught courses in Managerial Economics and Information Economics. He has written several Harvard Business case studies that are used by universities around the world.