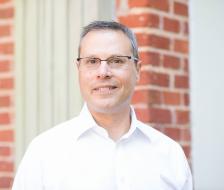 Michael Silvestri is a Professor of History at Clemson University. A specialist in modern British and Irish history, his research focuses on transnational networks of individuals and ideas across the British Empire. He is the author of two books, Ireland and India: Nationalism, Empire and Memory (2009) and Policing “Bengali Terrorism” in India and the World: Imperial Intelligence and Revolutionary Nationalism, 1905-1939 (2019), and a co-author of the textbook Britain Since 1688: A Nation in the World (2014). His research has been funded by grants from the American Philosophical Society and the National Endowment for the Humanities. His current book project, “’A Country that has Served the World Well with Police’: The Irish Policeman in the British Empire and Beyond,” explores the Irish role in policing the British Empire in locales ranging from North America to the British Caribbean to Southeast Asia to Australasia in the nineteenth and early twentieth centuries.