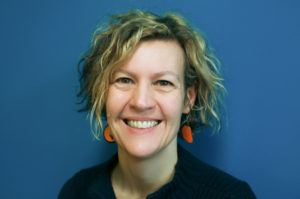 Dr. Lalita du Perron has been the Associate Director of the Center for South Asia since 2009 when she moved to UW-Madison from London.  She serves as the Academic Director of the South Asia Summer Language Institute (SASLI) and the South Asian Flagship Languages Initiative (SAFLI). Du Perron has her PhD from the Department of the Languages and Cultures of South Asia from SOAS, University of London, and held an AHRC Post-doctoral Fellowship at SOAS in the Department of Music from 2002-2006.

Du Perron specializes in the study of the lyrics of North Indian classical vocal music. Her first book, “Hindi Poetry in a Musical Genre: Thumri Lyrics” was published by Routledge in 2007. A two-volume book, co-authored with Nicolas Magriel, entitled “The Songs of North Indian Art Music”, was published by Manohar in 2013. She is currently working on a project exploring sexual harassment culture in North India.

Du Perron teaches a FIG “Gender and Sexuality in South Asia” in the Fall semester, and an online survey course of India in the Spring.