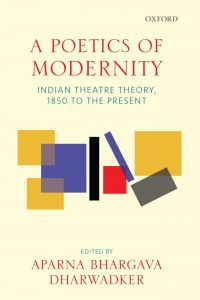 Callaway Prize for Best Book in Drama and Theatre has been awarded to A Poetics of Modernity: Indian Theater Theory, 1850 to the Present, (Oxford University Press), edited by Aparna Bhargava Dharwadker. The prize recognizes the book’s signal contribution to Drama and Theatre studies. A Poetics of Modernity assembles and makes accessible, to readers of English, a multi-lingual archive vital to understanding the rich history of modern Indian theory.  This archive accompanied and emerged from more than a century and a half of transregional dramatic activity. The documents by playwrights, directors, and other theorists will interest scholars and practitioners alike and significantly deepen our understanding of many of modern India’s leading theatre-makers.  Dharwadker’s lucid and extensive introduction provides a crystalline outline of the volume’s methodological principles and historical aims. Based on rigorous scholarship and wide reading, and featuring many new translations, this volume will make possible further theories of the range of theater practice across the Indian subcontinent.

The panel of judges, chaired by NYU’s Professor Una Chaudhuri, included Professor Martin Harries of UC Irvine and Professor Eng-Beng Lim of Dartmouth.  Harries said of the winning title: “Anthologies have made important Indian plays widely available. Dharwadker’s A Poetics of Modernitywill provide a crucial supplement to these resources: a “record,” in the editor’s words, ‘of Indian thinking about theatre on the part of those who have practiced it with distinction.’ This heterogeneous record, drawn from books, articles, letters, pamphlets, and other sources, in several languages, will enrich and de-provincialize scholarship and teaching – and, it may well be, also the making of theater. A Poetics of Modernity will likely prove a milestone in the transmission of Indian drama, performance, and intellectual history.”

The Callaway Prize is awarded every two years by NYU’s Department of English, for the best book on drama or theater published during the previous two years by an American author. It carries a cash award of $9,000.

The Callaway Prize for the Best Book on Drama was established in 1990 by Joe A. Callaway, an actor, drama lecturer, and supporter of theatrical causes.