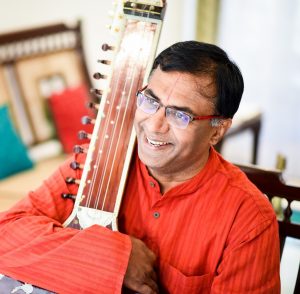 Carnatic music is one of India’s two classical systems of music and is predominantly practiced in South India and by people of South Indian origin in many parts of the world. One of its most remarkable features is its equal balance between compositions and improvisation, in sharp contrast to its North Indian counterpart which is about 90% improvisation. The primary reason for this is that Carnatic music is anchored by an incredible body is sophisticated as well as simple musical forms in various languages and the typical repertoire of a good artist may range over compositions created from as early as 2nd BCE to 21st century, though the majority of classical pieces presented are post 1700. Languages covered in most Carnatic concerts would be Sanskrit, Tamil and Telugu with occasional songs in Kannada, Malayalam or even Hindi. On very rare occasions pieces in some of the other Indian languages like Marathi, Bengali or Gujarati maybe presented by artists. The language and literature of Carnatic music is most interesting because this system was widely used not only by romantic poets but also philosophers, spiritual and religious leaders as well as social and political thinkers. Some of the songs / sections within those are meter based and others based on the melo-rhythmic flow. This presentation will highlight extra-ordinary composers such as Oottukkadu Venkata Kavi (1700-65), Tyagaraja (1767-1847), Shyama Shastri (1762-1827), Muttuswami Dikshitar (1775-1835) and their predecessors like Purandara Dasa (1484-1564), Annamacharya (1409-1508) as well as composers from 1850s onwards.

Chitravina N Ravikiran has been hailed as a multifaceted genius who “Brought new audiences to Indian music” (CNN) through his “Teasing precision and dazzling effects” (New York Times) and as living legend since age two who “Gave a new meaning to the word, prodigy” (NPR). Dubbed as the “Mozart of Indian Music” (Belgium Television), Ravikiran is also the initiator of the concept of Melharmony  in world music whose original orchestral creations and arrangements have been performed by leading orchestras and artists in several countries. He is also a prolific composer in the arena of Indian music and dance with over 800 traditional compositions to his credit in five languages – Sanskrit, Telugu, Tamil, Kannada and Hindi. A pioneering art-educator, Ravikiran has mentored numerous high draw performers across the world. Radio Australia declared that he is ”Perhaps the greatest slide player in the world today” while Sitar maestro Ravi Shankar went on record saying “If you don’t believe in God, look at Ravikiran”. He has enthralled audiences in numerous countries as a vocalist and instrumental virtuoso. Youngest musician to win the President of India’s Award for artistic excellence, Ravikiran has been decorated with a number of awards in several countries including Citations and Proclamations in his honour by cities of Houston, Tulsa and Madison.