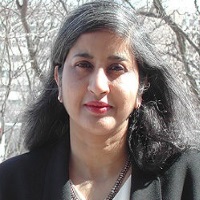 Aparna Dharwadker is Professor of Theatre & Drama and English, and Head of the Graduate Program in Theatre Research at the University of Wisconsin-Madison, where she teaches a wide range of courses in postcolonial, Indian, British, American, diasporic, and contemporary world theatres. Her book, Theatres of Independence: Drama, Theory, and Urban Performance in India Since 1947 (2005) won the 2006 Joe A. Callaway Prize, and her collaborative translation of Mohan Rakesh’s classic Hindi play, One Day in the Season of Rain, was featured at the KCACTF Regional Festival in January 2011. Her essays and articles have appeared in numerous journals and collections, including PMLA, Modern Drama, New Theatre Quarterly, Theatre Journal, Theatre Research International, The Encyclopedia of Asian Theatre, The Blackwell Companion to Restoration Drama, and Representing the Past: Essays in Performance Historiography. Dharwadker has held fellowships from the National Endowment for the Humanities, the American Institute of Indian Studies, the International Research Centre (Freie Universitat, Berlin), the Folger Library, and the Newberry Library, among others.