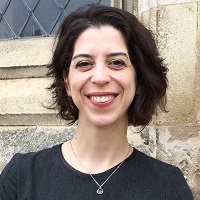 Mitra Sharafi is a legal historian of South Asia. She holds law degrees from Cambridge and Oxford (the UK equivalent of a JD and LLM) and a doctorate in history from Princeton. Sharafi’s book, Law and Identity in Colonial South Asia: Parsi Legal Culture, 1772-1947 (Cambridge University Press, 2014) won the Law and Society Association’s J. Willard Hurst Prize for socio-legal history in 2015. The book explores the legal culture of the Parsis or Zoroastrians of British India, an ethno-religious minority that was unusually invested in colonial law.

Currently, Sharafi is at work on her second book project. “Fear of the False: Medical Jurisprudence in Colonial India” examines colonial anxieties about dissimulation that were reflected in the work of medico-legal experts like the Chemical Examiners and Imperial Serologist. She is also writing an article on abortion during the Raj, and another on South Asian and West African law students who were expelled from London’s Inns of Court around the turn of the twentieth century. Sharafi’s research has been recognized and supported by the Institute for Advanced Study, the Andrew W. Mellon Foundation, the National Science Foundation, the Social Science Research Council and others. In spring 2017, she will be a fellow at the UW Institute for Research in the Humanities.

At the UW Law School, Sharafi teaches Contracts I to first-year law students. She is also part of UW’s Legal Studies program, an interdisciplinary undergraduate major that combines law with the humanities and social sciences. Sharafi has taught four Legal Studies courses: “Legal Pluralism,” “Lawyers & Judges in the British Empire,” “Law and Colonialism” and  “Medico-Legal History.” She is affiliated with the History Department, and is involved with the UW Center for South Asia. She was conference chair of the 44th and 45th Annual Conference on South Asia in 2015 and 2016.

Sharafi is a regular contributor to the Legal History Blog. Since 2010, her South Asian Legal History Resources website has shared research guides and other tools for the historical study of law in South Asia. Follow her blogposts at http://hosted.law.wisc.edu/wordpress/sharafi/ and on Twitter @mjsharafi